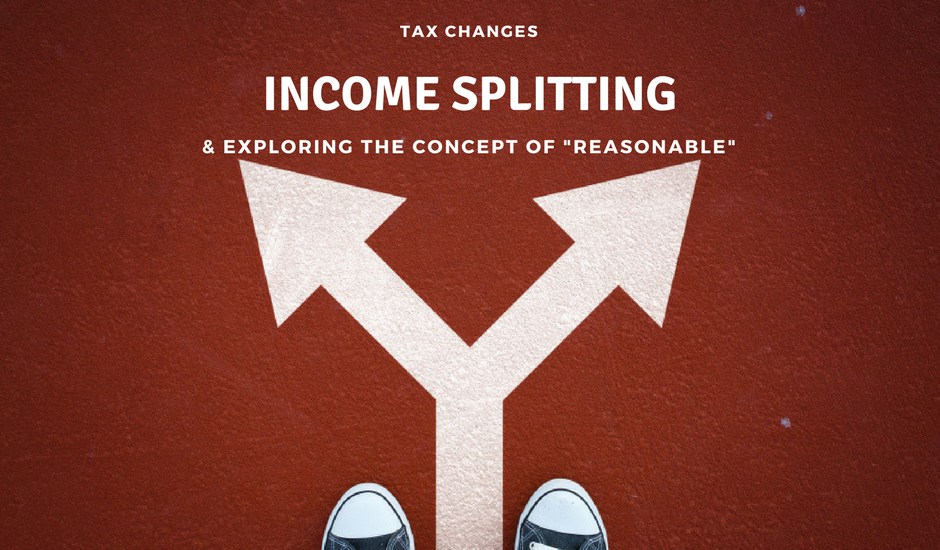 Tax changes, income splitting and exploring the concept of “ reasonable ”

Harpreet explores the concept of “ reasonable ” as it relates to the new tax on split income rules.

This past weekend, my husband and I were having a discussion regarding our kids’ education and he said that my expectation from a 5 and 7 year-old were “unreasonable.” This word lingered in my mind all weekend, as I pondered what “ reasonable ” meant and whether my husband and I would truly ever meet eye to eye in this regard.

At one point, I even thought of the proposed tax reforms introduced by the Government in July, 2017 and how the word “ reasonable ” had been used several times as a requirement for the size of dividends paid to family members for income splitting purposes. I envisioned myself as the Canada Revenue Agency (CRA) setting expectations, rules and regulations and my husband being the average taxpayer trying to explain the reality of the situation. In my head, I saw a system for our kids which was “fair” and if the kids followed all the rules, they would continue to have time to play and enjoy. In my husband’s head, he thought I was taking the “fun” out of their childhood and by putting so much pressure on the kids, I would turn them away from education.

As I compared my situation with the new tax reform, I realized how similar the two were: the Federal Government wants to introduce “fairness” in the Canadian tax system by taxing the 3% of taxpayers who apparently are caught by these rules.

The average business owner is confused as to what the big deal is: what is it that Finance has written in the July release that is causing the uproar? The Government has mentioned items, strategies and concepts that taxpayers did not know existed. It’s as if they have “spilled the beans” regarding converting regular income into capital gains, utilizing the lifetime capital gains exemption, etc. Therefore, I encourage clients to ask questions, and am happy that they are starting the conversation and paying attention to details that otherwise were mundane to them.

However, my personal opinion is that the additional details released on December 13, 2017 (12 days before Christmas) are still complex and difficult to fully comprehend.

Those taxpayers with professional corporations and those considered to be providing services are most impacted because the ability to split income with family members who are not active in the business is now subject to a reasonability test.

Generally, the tax on split income (“TOSI”) rules should not change the strategy in the following circumstances:

Let’s use an example of an owner-operator truck driver and how these new rules may impact personal taxes.

Assume our owner-operator is incorporated and the company has only common shares issued, with 50% owned by the husband and 50% by the wife. The wife provides administration services (accounting, administration, etc.) which would have cost $5,000 had an arm’s length individual been hired instead. The husband takes a salary of $50,000 a year and distributes the remaining amounts via a dividend of $60,000 – $30,000 to his wife and $30,000 to himself.

With the new TOSI rules, the husband’s taxes will remain unchanged (as he is active in the business and assumed to be receiving a “ reasonable salary ”). The tax on the dividend paid to his wife, however, would be significant – dividend of $5,000 will be taxed at the regular rate (assuming this is a reasonable return), but the remaining $25,000 of dividends will be taxed at the highest marginal tax rate (45%) – meaning an increase in tax of $11,250!

Hence, any taxpayers who have structures in which non-active members own the same class of shares as the active shareholder, should speak to their accountant and see if the company structure can be updated.

At the same time the Finance Minister released these rules, the CRA issued guidance on their application. As per the CRA, “they will not substitute [the CRA’s] judgment for what is a reasonable amount where the taxpayers have made a good faith attempt to determine a Reasonable Return based on the Reasonableness Criteria.” The word reasonable is used three times in this sentence and each time in a different context.

The issue is the amount of power we are placing in the hands of the CRA to decide what is reasonable, just and fair. Last month, the Auditor General’s report indicated that the CRA was failing to provide taxpayers with complete, accurate, clear, and timely information and often times the victims of its failure are low and middle-income taxpayers who cannot afford professional advice and turn to the CRA for their information.

Furthermore, resolving these disputes with the CRA can be frustrating – the CRA often reassesses taxpayers based on incorrect regulations and taxpayers only option is to file a notice of objection. The piece that the CRA does not tell taxpayers is that the objection process is very tedious and can be expensive. My experience is that it takes CRA about a year to assign an objection to a review officer, and then more months, or a year or two, to resolve the matter.

In this regard, the CRA is the parent that says, “my way or the highway.”

As I compared my situation to that of the government and CRA, I realized that there is no easy way to define “ reasonable .” My husband and I have a common goal of wanting the best for our children; we may disagree on the technique of achieving this, but our goal remains the same. I am not sure we can say the same for the CRA and the government. As a business owner, you can expect more compliance and administration resulting from these rules. It is imperative that you work with a professional who can help you address these changes and apply them to your specific situation.

Connect with Harpreet by calling 905.790.0657 Or email info@wadehrapc.ca or visit us www.wadehrapc.ca

how can we help you?

Contact us at Wadehra Professional Corporation or submit a business inquiry online.